3rd ANNUAL 2 FLY – A LITTLE COMPETITION FOR A GREAT CAUSE

Sunday September 12, 2021 was the third annual Mad Dog Chapter of Trout Unlimited 2 Fly
fishing tournament. The event is a catch and release tournament of 2 person teams to raise
money for the Vermont Trout Camp (http://www.vermonttroutcamp.com/). This year we had
11 teams register with 9 being able to participate in the tournament. Each team pay $100 to
register and the tournament is setup so that 50% of the registration fees go back as prizes to
the top 3 teams. 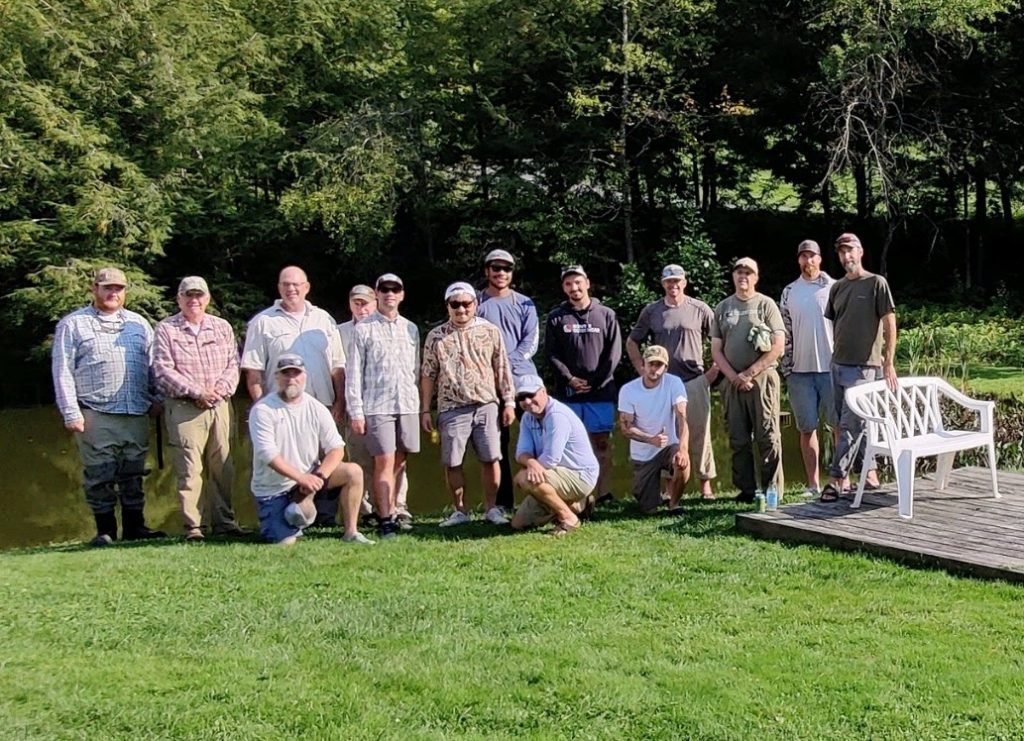 The tournament awards points based on the length of the fish, the different trout species
caught, and trash picked up along the river. The day starts at 8:00 with a meeting at The Fly Rod
Shop in Stowe VT (https://www.flyrodshop.com/) then the teams head out to the Winooski
River upstream of Richmond to spend the next 6 hours fishing for their best 6 fish. The teams
then report back to The Fly Rod Shop to report in and see which team ended up with the most points.

This year’s winning team (for the second time in 3 years) was the combination of Kevin Oxford
and John Synnott with a total of 95 points. Second place belongs to the team of Lorenzo
LaBrusciano and Ray Wilson with 85 points, while third place went to Ryan Whitney and
Andrew Masenas with 82 points. Now Kevin and John will have their names added to the ‘Old
Wicker Creel’ again. 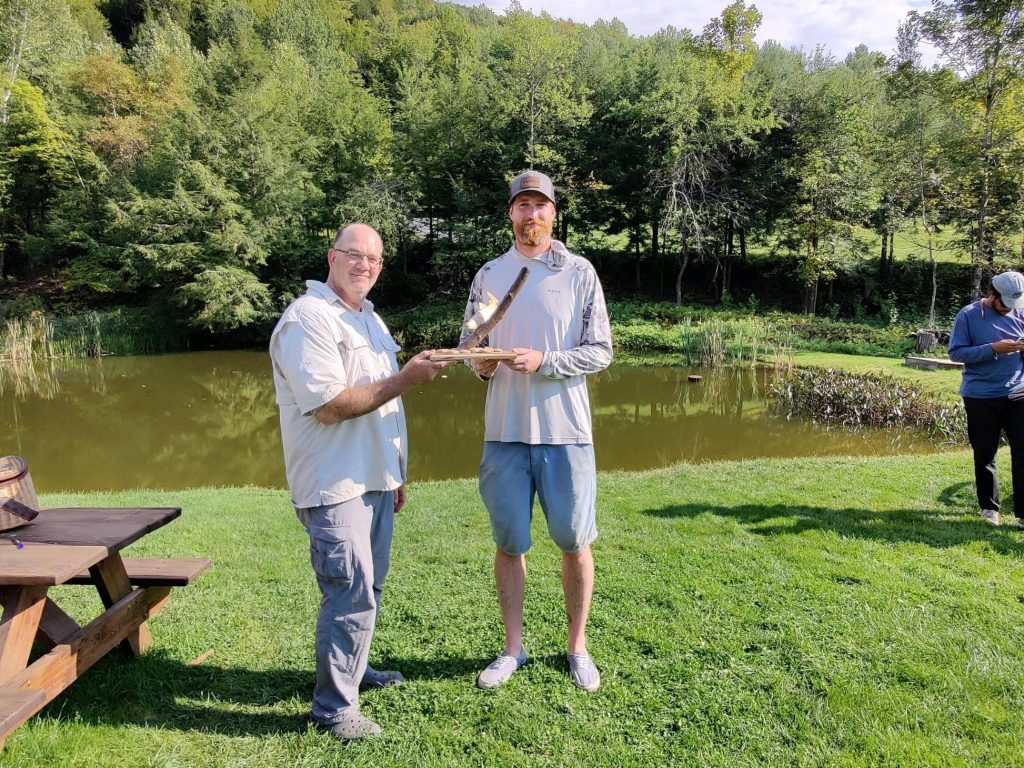 The tournament also recognizes the top 3 largest fish of the day. The top fish, by a mere
millimeter, goes to Matt Maertens with a 13” Rainbow. Second place went to John Synnott and
third place to Kevin Oxford. Starting this year we have a trout carving by our very own Tom
Hurd, this will be the on-going trophy for the largest fish and Matt will be the first name on it.
Between tournaments you can find the wicker creel and trout carving on display at The Fly Rod Shop. 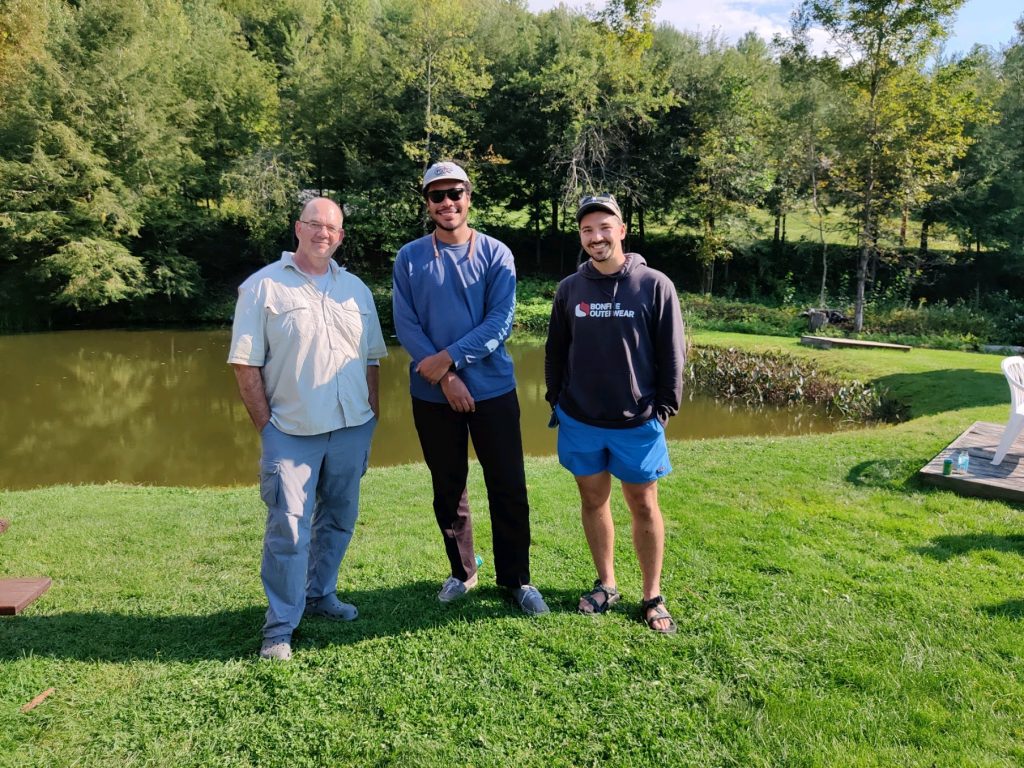 A few statistics about the day – there were 45 trout caught, released, and reported for the
tournament, 27 were Rainbows, 15 Browns and 3 Brook Trout. In addition, we collected several
bags of trash plus a chair, an old bike rim and a dog leash!
All of this is great fun, but the real reason is to raise money to support the Vermont Trout Camp. 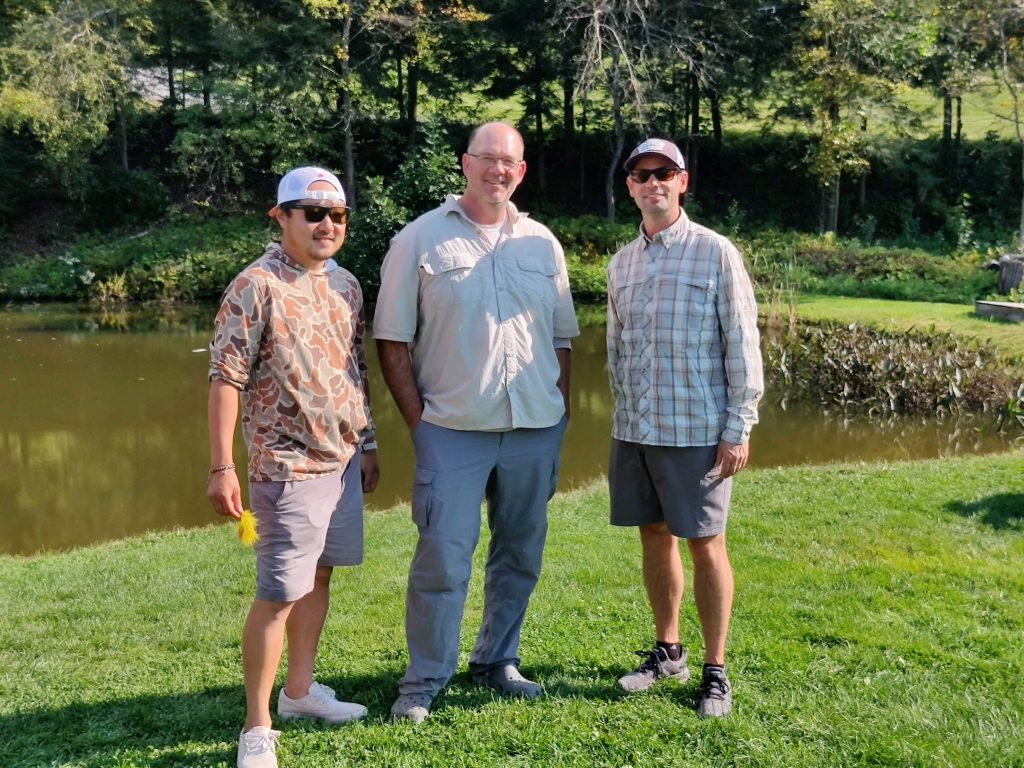 This year the tournament raised $715!
This is due in no small part to a couple of the winning teams donating their prize money back to Trout Camp.
We can not thank all of the teams enough for supporting us through the tournament along with
the continued support of The Fly Rod Shop for hosting us and providing gift cards for everyone who registered.

What: A dry/dropper fly fishing catch and release tournament – any combination of flies but the top fly needs to be fished dry

Where: The Winooski River and its tributaries (excluding the trophy stretch in Waterbury) meeting at The Fly Rod Shop in Stowe VT

Why: All proceeds to benefit the Vermont Trout Camp – http://www.vermonttroutcamp.com/

Sunday September 13th saw 10 teams of 2 fly fisherman each descend upon the waters of Central Vermont for a little competition – the second annual Mad Dog Two Fly. The goal was to see which team could catch, photograph, and release the largest 6 trout over the course of the day. By 3:30 it became clear that Chunky Speedman with 92.5 points, the team of Tom Getz and Matt Getz, were this year’s winners and will have their names added to the coveted Old Wicker Creel!
Full Report and Images Click Here… 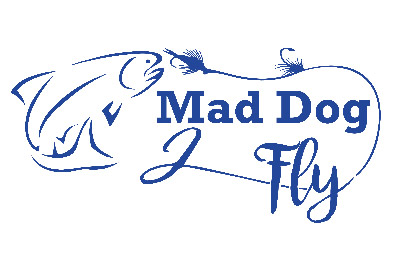 The second annual Mad Dog 2 Fly Tournament will be held on Sunday September 13th.
The format will be similar to 2019 and once again will be run out of the Fy Rod Shop. Click here for more details.

When: Sunday 9/13/2020
What: A dry/dropper fly fishing catch and release tournament – same pattern, color and size flies must be used all day
Where: The Winooski River and its tributaries (excluding the trophy stretch in Waterbury)
Who: Teams of 2 – limited to 20 teams
Why: All proceeds to benefit the Vermont Trout Camp – http://www.vermonttroutcamp.com/
Cost: $100 per team – registration at https://www.eventbrite.com/e/mad-dog-tu-2-fly-tournament-2020-tickets-92544391767

The rules of the competition can be found by clicking here.

The inaugural Mad Dog 2 Fly tournament was held on Sunday September 15th. We all met at the Fly Rod Shop in Stowe for the pre-fishing meeting, the weather was great and the 13 teams of two received the rules and measuring boards. Everyone then departed for the river and teams had 5 hours to fish the Winooski and it’s tributaries to record their best 6 Trout.

All the members of the inaugural Mad Dog 2 Fly tournament. 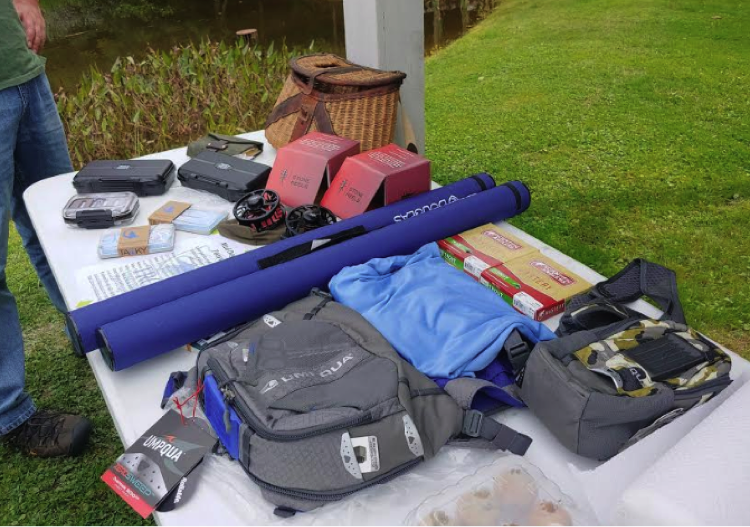 The prizes everyone was competing for!

Umpqua Feather Merchants provided both the first and second place prizes of chest packs for the largest fish and The Fly Rod Shop for providing a tech long sleeve shirt for third place.

The vintage creel was the true trophy (think Stanley Cup of fly fishing) as each year’s winning team will have their name added to the creel. The creel will be on display at various TU events (like our banquet). When not on the road you can find it at the Fly Rod Shop in Stowe. Think about adding you name to this coveted prize next year : )

Once the dust settled the finishing order was: 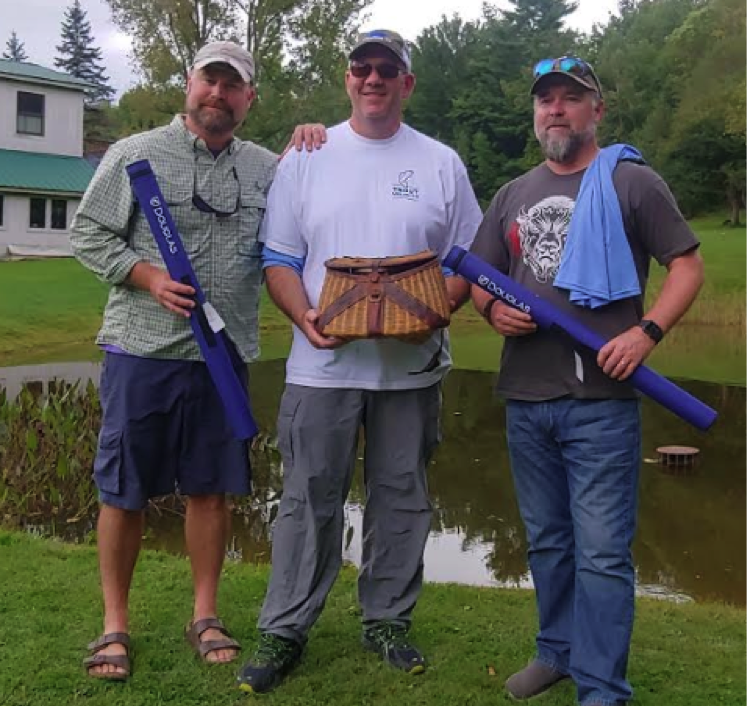 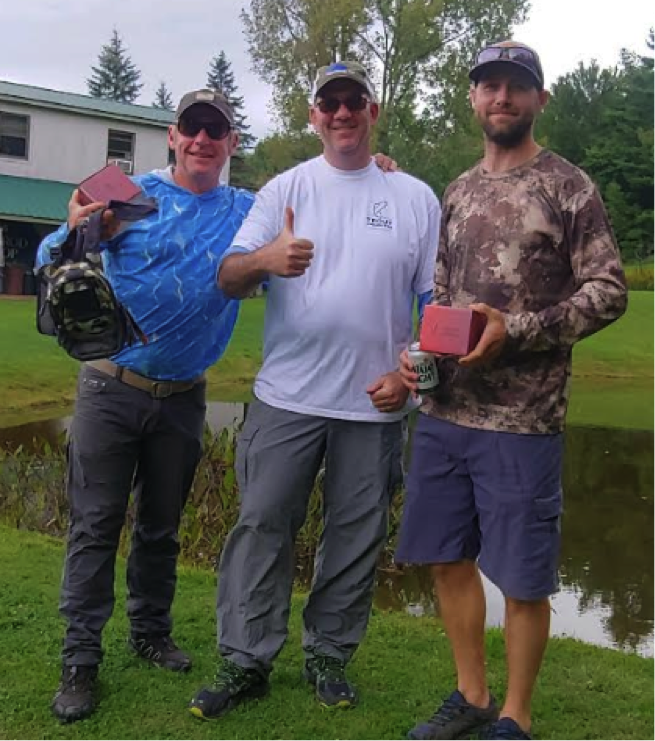 The second place team of Matt Stedina and Ben Wilcox.

The third place team of Ben Metcalf and Jesse Haller. 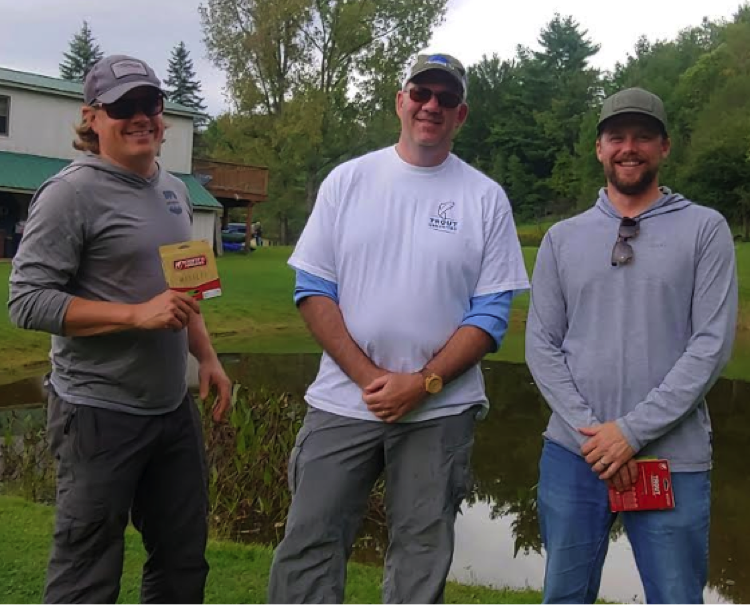 In addition to the team prizes we recognized the top three largest fish. We had a tie at the top with 3 competitors catching 17 inch fish. We resorted to our tie breaker which was the next largest fish caught by each fly fisher. After the tie breaker John Synnott took the top prize followed by Matt Stedina and in third Kevin Oxford. 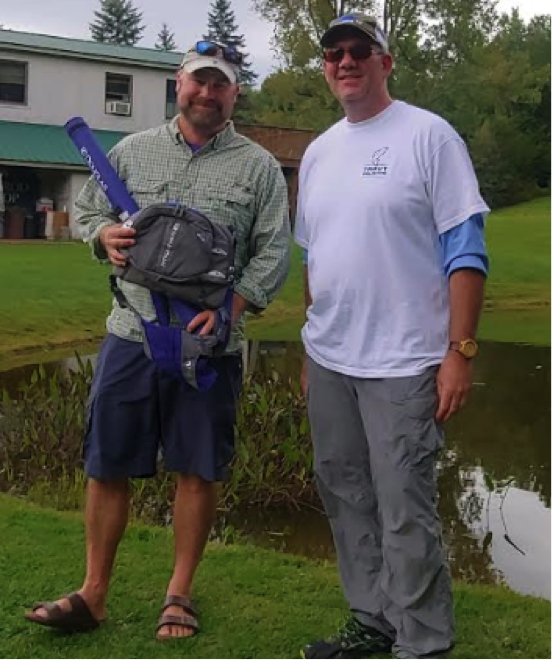 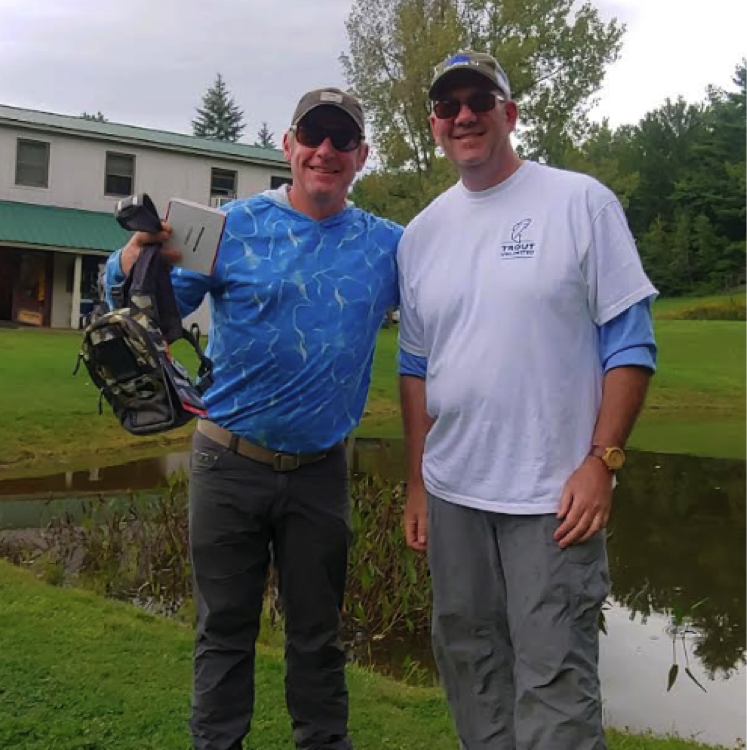 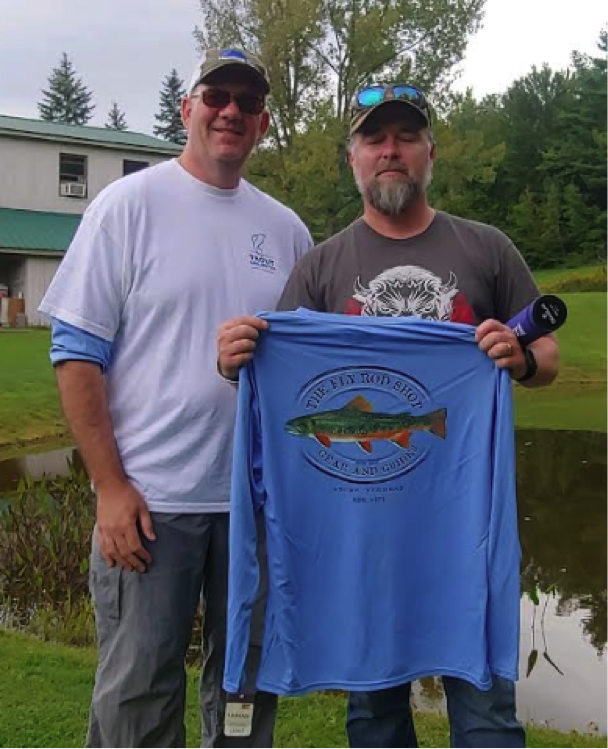 Bonus points were awarded to each team that returned with trash they had picked up that day while fishing. Below is a picture of what was brought in…the Winooski also benefitted from this event! 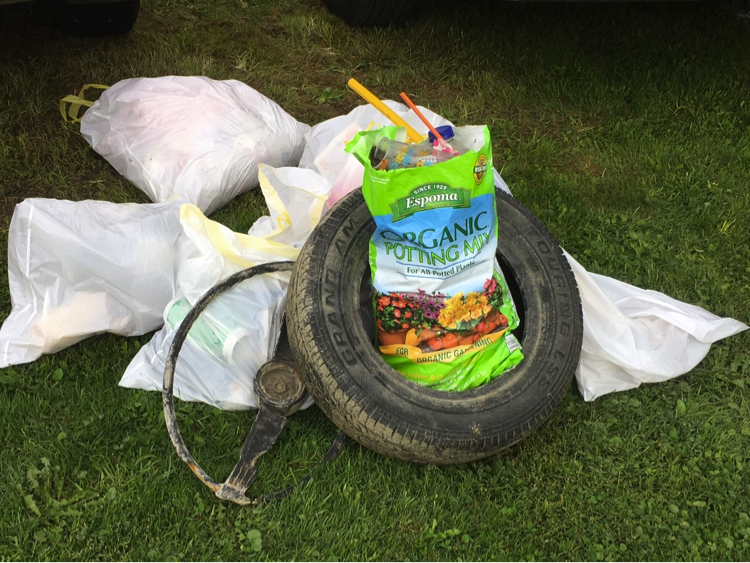